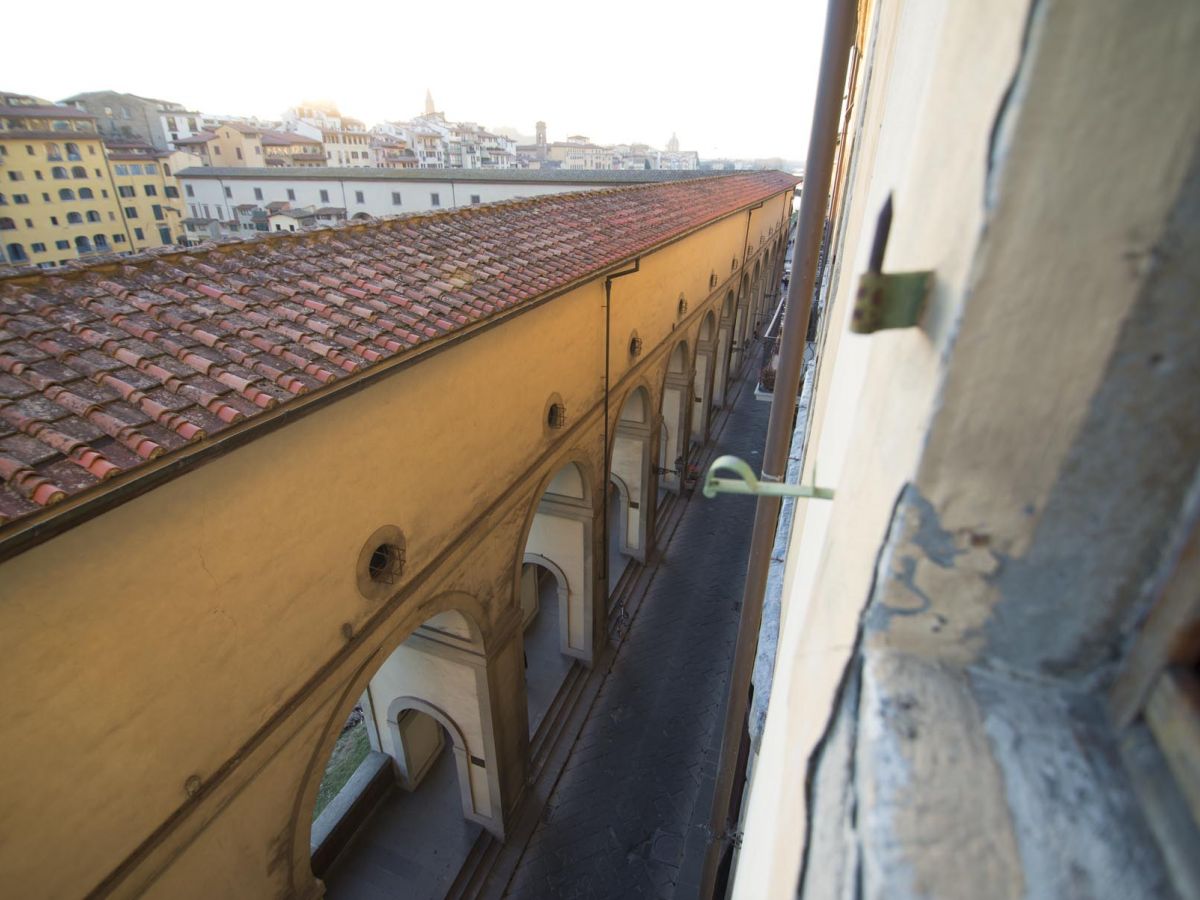 The evolution of an idea, how a corridor saved the Medici and a royal wedding!

From food market specialized in meat the streets and workshops of the bridge turned little by little into a crossroad of the beauty, where the best goldsmiths fought to be present. And all of this thanks to the Vasari Corridor…

A hundred years.
That is how long the Ponte Vecchio, built in 1345, had to wait to transform and overcome the original purpose it was built for.
To protect the cleanliness of the city centre the “beccai”, that’s how the butchers were called at the time, were forced to move their workshops on the sides of the bridge, so that they would be more isolated, for hygienic reasons, from the palaces of the centre.
Furthermore, the streets where the butchers could carry their chariots and work were limited to that area, so all the leftovers from their work, that were unhealthy and smelled, were kept secluded and disposed directly in to the river Arno.
It was then in this period that the bridge was repurposed as the city meat market and the “beccai”, obtained the ownership of the workshops and of the bridge itself, started building small buildings overlooking the river, which were held up with wooden poles.
But the evolution of the beautiful Florentine bridge did not stop here.
The “Vasari corridor” was indeed built in 1565 by architect Vasari, commissioned by Cosimo the I to connect Palazzo Vecchio, then just like today the heart of administration and politics in Florence, with the private residence of the Medici, the Pitti Palace.
This elevated corridor, one kilometer long, starts from Palazzo Vecchio, continues through the Uffizi museum, over the lungarno and enters the bridge passing over the workshops on the left side of it. The corridor then exits near the Mannelli tower and proceeds towards the Oltrarno until it reaches the Pitti Palace. Even if this was the official explanation that arrived to the present, the real reason for building the corridor was another: this corridor in fact was not meant for everybody, but for a few chosen ones. That is because the Medici, during a turbulent moment in their history, wanted to be free to roam around Florence and be able to execute their administrative duties, being protected from attacks and protests. Indeed the population did not like the reforms that Cosimo I enforced, transforming completely the system of government and in fact suppressing the Florentine Republic.
Furthermore the union between Francesco, the Grand duke’s son, and Giovanna of Austria was not very well liked; such event was the excuse to build in fact the corridor.
It was just a few years after this innovation when Ferdinando I in 1593 decided to replace the “beccai” workshops with the goldsmiths and jewellery stores, since he did not like to have such an unhealthy business right under the Vasari corridor.
It is to be noted that the Vasari corridor, in the frantic days of the liberation in 1945, was the only way to move from the north side of the river and the south, as it is shown also in the episode dedicated to Florence of the movie “Paisà” by Roberto Rossellini, where the main character passes by the Uffizi gallery full of wrapped antique statues.
A bridge of many stories connects Florence to this day, like the tale by Gerhard Wolf. But we will talk about this later…