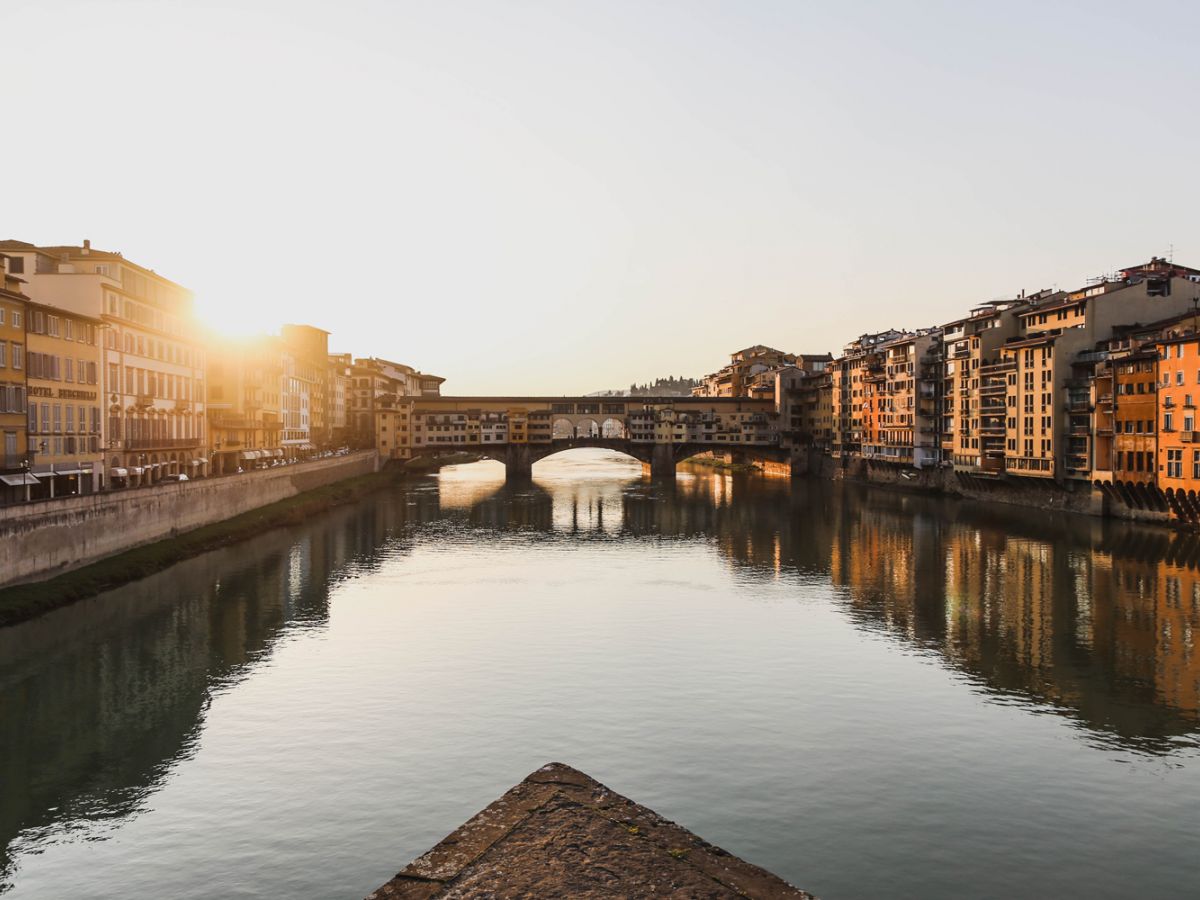 Ponte Vecchio: the Bridge that marks the history of Florence, for almost 700 years.

Solid, innovative, characteristic. An architectural work that stoically connects the two sections of the historical center of Florence, separated by the Arno and that from 1345 handed down the culture of the Renaissance to posterity in a symbolic way. It resembles the transition point from the Medici times till nowadays.
Undoubtedly  one of the most famous bridges in the world, the Ponte Vecchio is one of the monuments that mnemonically we immediately connect to Florence. It represents an example of the struggle of man against natural events, of the genius that allows you to overcome difficulties and even manage to take advantage of them.
The Ponte Vecchio crosses the Arno river about 150 meters downstream of an area where it offers a natural origin and in which it is narrower in its passage upstream of the Cascine, through the historical center of Florence. It was not, however, the first attempt by the Florentines to overcome the Arno and to unite the two vital areas of the city. In fact during the first century BC a primordial crossing of the river was positioned slightly further upstream of the current site and presented a slanting trend compared to the current, in order to react better to the floods that already cyclically characterized the course of the Tuscan river. Under Adriano, in 123, this walkaway was consolidated as to assist the construction of the Via Cassia Nuova. Even at that time it was characterized by masonry pylons with wooden beams as a Roman architectural canon. Floods, negligence and wars that raged constantly in the post-imperial time were the main causes of the collapse of the first-born bridge which, indicatively, occurred towards the VI-VII century AD. There had been then many other attempts to build new passages later but they were all destined to failure due to the bad weather conditions.
It was under Charles The Great  that the crossing was located in its current position and it was several times rebuilt as more recent studies show. The last time it was wiped out was in 1333, during one of the most violent floods we witness. Only after the construction of the “lungarni” the current bridge was built. The work was inaugurated in 1345 and according to Vasari it was entrusted to Taddeo Gaddi while according to other historians it was instead given to Neri di Fioravante.
It soon had the three passes that still distinguish it today, large and bow-lowered which was something absolutely new in the western world: for the first time, in fact, it overcame the  typical model of the Roman era that had been provided for the use of full-height passages (the typical arcades). This was made in order to increase the number of arches and pylons since  in case of swollen river it would have been a danger. In 1455 the butchers of the time, the so called “beccai”, were forced to move their shops to both sidewalks of the bridge, so that they were isolated for hygiene reasons from the buildings of the center. With the construction of the “Vasari Corridor”, which acted as a link between Palazzo Vecchio (then as now political and administrative center of Florence) and Pitti Palace (the private residence of the Medici family) the bridge gained new importance. In 1593 it was decided to substitute the butchers’ workshops with the goldsmiths and jewelers of the city, so that under the Vasari corridor, which was nothing more than a raised passage above the shops, there was a more noble and prestigious trade, worthy of the nobles of the time. This is how Ponte Vecchio has arrived through centuries till nowadays  to become the  symbol of Florence. Its edification and progression is still a case of study for anyone exploring the architecture and its history.